What is the 5 C’s Of Credit? Concept & Types 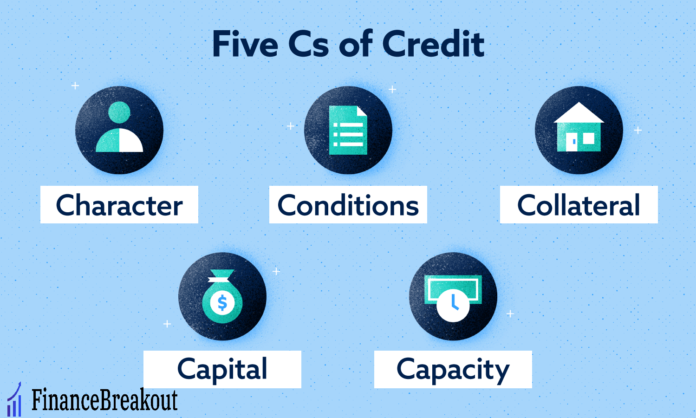 The 5 C’s of credit is a system that lenders use to gauge the riskiness and potential for financial loss in lending money. It weighs five characteristics of borrowers against their ability to pay back loans, with an estimation about whether they will default on them or not.

The five C’s of credit are character, capacity, capital (ability to pay), collateral, and conditions.

Let’s Understand More About the Five C’s of Credit

The 5 C’s of credit is a well-known method to measure the credentials and qualifications of borrowers. It includes both qualitative measures (such as checking for mistakes in their financials) and quantitative measures such as income statements or debt ratios.

Creditworthiness is a significant factor in determining the interest rates that an individual or business will be offered. There are five common factors, known as “the 5 Cs” and they include: character, capacity (or level of experience), capital (such as assets on hand), collateral to secure loans should one default, and conditions impacting the ability to stay current with payments like economic situation.

A credit report is a document that contains detailed information about your past borrowing habits, and whether you repaid loans on time. One of the most important things it shows is how much money people owe to lenders in general, which can be an indication of financial stability or instability.

Credit reports are compiled from data collected by companies such as Experian, TransUnion, Equifax among others which include details like account balances outstanding (loans taken out), late payments made within the last seven months etc., all this makes it difficult for an individual with bad credits to get approved.

FICO is one of the most popular and widely-used credit scoring models. The company uses a variety of information to create complex algorithms that calculate your financial viability, which lenders use as an indicator for lending decisions.

Note – Lenders use LexisNexis Risk View to identify potential problems among their borrowers before issuing loans.

One of the most important factors in determining a borrower’s creditworthiness is capacity. Capacity measures the borrower’s ability to repay their loans by comparing income against recurring debts and assessing debt-to-income (DTI).

Lenders calculate DTI by adding together a borrowers total monthly debt payments, dividing that number with gross monthly income; this makes it easier for lenders to see what percentage of an applicant’s net pay goes towards paying back creditors.

Ideally, banks want applicants’ DTIs below 35% before approving new financing applications or mortgages because studies have shown those who are approved within these parameters tend not only to be more likely to keep up on their loan but also live happier lives free from financial stressors such as foreclosure or bankruptcy due diligence.

In the US, some lenders are prohibited from issuing loans to consumers with higher DTIs. Qualifying for a new mortgage typically requires borrowers to have at least 43% of their gross income left over after monthly payments in order to ensure that they can afford these loans and maintain some form of ease.

Lenders examine an applicant’s future job stability, not just their current income. For this reason, many employers may be hesitant to hire a new employee if they are unsure about the company being able to keep them employed for long enough for that individual to repay loans.

Lenders take into account any capital the borrower puts towards a potential investment before deciding to offer them a loan. A large contribution by the borrower decreases their chance of default, resulting in negative consequences for both parties involved and other creditors around them.

For example, borrowers who can put down at least 15% on their home are typically able to receive more favorable rates from lenders than those with little or no equity invested in the property they’re purchasing – even if this lender might be government-backed and supposedly “easier” to come across terms.

Collateral can make it easier for a borrower to secure loans from lenders. If they default on their loan obligations, the lender knows that they will have something of value leftover to sell off and recoup some money. For example, auto loans are secured by cars, mortgages are secured by homes – these things act as collateral ensuring repayment of the original debt owed after-sale or repossession.

Secured loans or secured debt are a type of loan that is generally considered to be less risky for lenders. The collateral form which the lender chooses can have different effects on interest rates and terms, but it’s common for them to offer lower rates and better deals than unsecured forms of lending.

In order to determine your risk, lenders will look at the condition of a loan before they finance it. Lenders are more likely to approve a borrower’s loan if the conditions of the said loan will benefit their business.

A car or home improvement loans have specific and limited purposes, so they would be easier for lenders to finance than an open-ended signature credit card account that can be used on anything.

Additionally, outside factors such as the state of the economy and industry trends may come into play when deciding whether someone is approved for a large line of unsecured debt like this because even though it seems like these borrowers should get preferential treatment over other applicants with less favorable background information.

Who hasn’t been able to keep up payments in order to stay afloat financially; lending institutions make decisions based on risk analysis which takes all elements involved into consideration before giving out any type of approval decision.