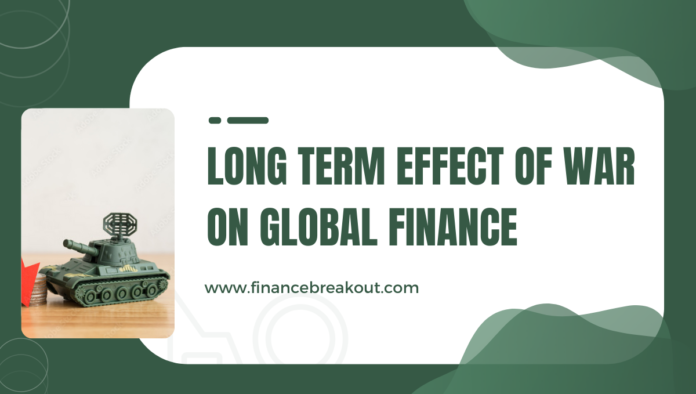 What are the effects of War on Global Economy worldwide?

The global markets have been impacted by the ongoing conflict between Russia and Ukraine. The war has resulted in a deterioration of the financial condition of both countries, as well as global investors.

Are we going to have another Stock Market Crash in 2023?
Let’s read to find out what is the situation right now.

The Russian rouble has lost more than half its value against the dollar since the start of the war. This has increased Russia’s debt burden and made it more difficult for the country to borrow money. The Russian government has also had to spend large amounts of money on military operations in Ukraine, which has further weakened its finances.

Ukraine’s economy is in even worse shape than Russia’s. The value of the hryvnia (Ukraine’s currency) has fallen by more than two-thirds since the start of the war. Inflation is now running at more than 50%, and the country is facing a severe recession. Ukraine has also had to spend large amounts of money on military operations in eastern Ukraine.

The FED has already increase the interest rates multiple times.

The war between Russia and Ukraine has had several other negative consequences for global markets. It has led to a sharp increase in global oil prices, as both Russia and Ukraine are major producers of oil and gas. The conflict has also increased global financial volatility, as investors become more nervous about the potential for further instability.

Effects of the Recent Increase in Geopolitical Risk

Note: The figure plots the response over time of world GDP (left panel) and world inflation (right panel) to a rise in geopolitical risks sized to mimic the increase occurred between January and April 2022. The solid red lines in the figure plot the central estimates. The dashed blue lines denote the 70 percent confidence intervals. The variables are plotted from January 2022 to December 2023 in deviation from a no-war baseline.

How war affects economies and the stock market

War is a global phenomenon that has a significant impact on economies and stock markets around the world. When a country goes to war, its government spends money on weapons and military equipment, which can lead to higher levels of public debt. This can also cause the stock market to decline, as investors pull their money out of riskier investments in order to protect it.

In addition, war can have a negative effect on economic growth. This is because it often disrupts trade and commerce, as well as international travel. It can also lead to higher levels of unemployment, as companies lay off workers in order to cut costs.

Overall, war can have a significant impact on the stock market and the economy. While there are some cases where war can lead to a boost in economic growth, it is more often associated with negative consequences. Investors should be aware of these risks when making decisions about their money.

#Investing during times of war

When a country goes to war, the stock market often declines as investors pull their money out of riskier investments. This can be seen in the graph below, which shows the stock market indexes for the United States and Iraq from 2003 to 2009.

The impact of conflict on trade and investment

This can have a negative impact on the economy of the country or region, as well as its citizens. The lack of trade and investment can lead to a slowdown in economic growth, higher unemployment, and reduced access to essential goods and services. Furthermore, the diversion of resources away from productive sectors towards military spending can also damage long-term economic prospects.

So, what can be done to mitigate the impact of conflict on trade and investment?

There are several things that can be done to help reduce the negative impact of conflict on trade and investment. These include:

– Ensuring certainty and predictability for businesses

The consequences of war for international organizations

The IMF was created in 1945 with the goal of stabilizing global financial markets. The organization provides loans to countries that are experiencing financial difficulties, and it also coordinates international financial policymaking. The World Bank was established in 1945 as well, with the goal of providing financial assistance to developing countries. The World Bank has funded several important infrastructure projects over the years, including schools, hospitals, and roads. The WTO was created in 1995, and its goal is to promote free trade and reduce trade barriers. All three of these organizations are vital for maintaining global financial stability and promoting economic growth.

Unfortunately, war can have a devastating effect on these organizations. For example, the Iraq War led to a significant increase in oil prices, which caused the IMF to suffer a loss of $500 million. The conflict also disrupted trade flows and caused the WTO to lose $1.7 billion. The financial consequences of war can be quite severe for these organizations, and they often must scramble to rebuild their finances after a conflict has ended. This can be quite difficult, especially if there is considerable damage done to infrastructure or if there is very much destruction done to businesses as well.

What are the Ups and Downs of Guaranteed Loans for a Small Business?